Five Minute Projections - the Wisdom of Crowds at Work!

[alternative title: How I Once Beat Industry Professionals in a Projections Contest With ~Zero Research]

In August 2018 Justin Freeman ran an open projections contest called Leader of the PAC, attracting amazing fantasy professionals including some personal idols like Mike Clay, Anthony Amico, and Peter Howard. Tempted by the thought of putting my projections to the test, I also entered … and finished 9th out of 31 - ahead of all three of them! This post is an accounting of exactly how I came up with the projections - the method may surprise you! (shameless Buzzfeed moment :smirk:)

The Usual Process of Projections

Despite this being an open contest against fantasy professionals, it doesn’t surprise me that there were only 31 entries: creating fantasy projections is a daunting task. As a general process, you need to decide on player totals for every offensive skill position on all 32 teams while deciding a) which factors will have an effect on the numbers you want to generate and b) what kind of effect they will have. Here’s a small sample of the factors that might (depending on your choices) have an effect on what numbers you select as predictions:

If you’re doing the full dive into these factors, you might end up with a detailed chart a lot like Mike Clay’s fantastic #clayprojections. 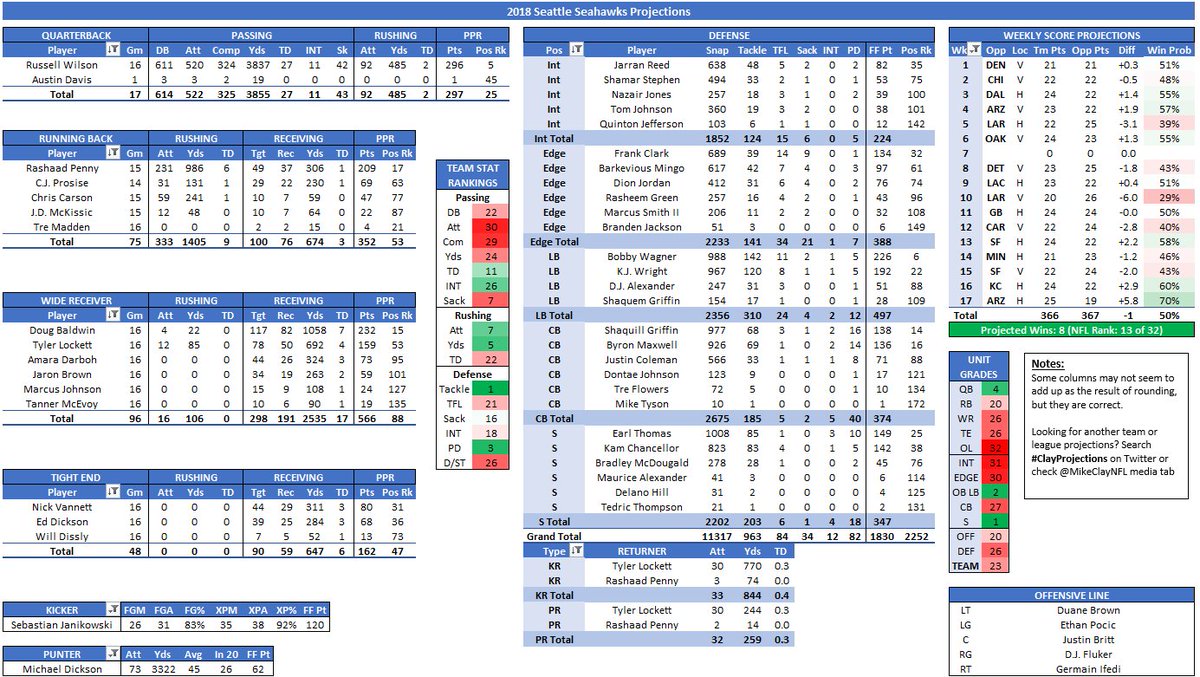 I have a secret - I did absolutely no team or player research when I made these projections! Instead, I simply combined two things: the freshest possible FantasyPros redraft ranks I could manage to get my hands on, and a database I’d made of historical player PPR points-per-game production.

My actual projections workflow then looked like this: 1) Wait for the very last possible day to submit projections. 2) Scrape the FantasyPros ranks. 3) Match the ECR average to the corresponding spot on the table. 4) Copy that number to the submission sheet. No agonizing, no thinking, no actual analysis - just plug and play.

I’m chuffed that it placed in the top third - it’s an incredible validation that simple methods can get you 80% of the way there. Am I ready to trumpet that Clay, Amico, and Howard are wasting their time and that this is the best thing since Zero RB? The answer is most definitely a NO!

Using Expert Consensus Ranks is inherently a way to stand on the shoulders of giants - without those guys and many others dedicating that incredible amount of time and effort, the model would fall apart.

James Surowiecki’s “The Wisdom of Crowds” relates an anecdote where the crowd at a county fair accurately guesses the weight of an ox when their individual (blind) guesses are averaged. Surowiecki’s thesis is that a diverse group of people independently trying to predict an unknown tends to do better than any one expert - and definitely applies to projecting fantasy football.

As far as I can tell, FantasyPros is the closest we can get to having a “wise crowd” - each of the experts does their own work to develop their projections and ranks, so it fulfils all three criteria of being diverse, independent, and decentralized.

Comparatively, DLF Mock ADP is a great resource - but I have some qualms about relying on its objectivity. because it samples a smaller group of people who rely on similar knowledge-bases (i.e. are followers of DLF on Twitter). This reduces the diversity and independence of the crowd - so the overall “wisdom” (as defined by Surowiecki) is reduced. That’s not to say it doesn’t have its uses - I think it’s a great barometer over a period of time - but it’s not as good a summary of “true” value as a more neutrally selected set of opinions.

What does this mean for you?

Dynasty (and fantasy football in general) is about finding your niche.

If projections is not your niche, by all means take the opportunity to rely on the wisdom of crowds - it’s effective at getting you most of the way there! I use FantasyPros a ton, and obviously highly recommend it as a resource.

If you’re able to dedicate the time to develop predictions and fine-tune them, by all means do so! Taking a deep dive into team/player research is always incredibly valuable for improving your fantasy football knowledge - and you’ll quickly learn for yourself what you think is predictive and important.

I’ve uploaded the PPR projections Excel workbook to GitHub so you can play with the data and make your own projections! :smile:

Potential Points is, far and away, the best way to award rookie draft picks. Heck, best ball is the best format for league lineups too, let’s be honest!

This app helps calculate Potential Points for ESPN leagues. MFL and Sleeper already have built in functions to do this! (and you should be using those platforms, but …)

ffopportunity is our Expected Fantasy Points package and helps measure the performance of players as compared to the expected scoring for an average player in that situation.

An open-data fantasy football repository, maintained by the DynastyProcess team.

The main files available are:

and a few more to come!

This app helps you build your own rankings and compare them to consensus FP ranks!

The Crystal Ball predicts how your team will finish the season by looking at past All Play Percentage - should you be rebuilding or pushing all-in?

What is “All Play Percentage”?

All Play Percentage is the percentage of games you would win if you played every team in the league every week. It’s a good proxy for how good your team is relative to the other teams in the league. We calculate the win probability of any given game as a proportion of your team’s all play percentage compared to your opponent’s.

Our Trade Calculator features a startup mode, wizard suggestions, and customizable values based on your preferences for depth and rookies.